WE ARE FOOTBALL FOR FOODBANKS

“About once every 2 weeks someone posts here saying they’re looking to play a bit of footy and if there’s anyone who needs a player. There’s always loads of interest and others say they want to play too. Now that 5 a side is going again, I think it’s time to take the plunge and set up our own team lads.”

That’s what I posted on an Internet forum in August 2020. Unfortunately that 5-a-side team never came to fruition.

But something else did.

Football For Foodbanks CIC is an organisation that sets up football games, despite being pretty rubbish at football. We encourage rubbish players, because sometimes there isn’t always a platform for them to play.

Not played in a good three years? We’ll have you.

Got a dodgy knee? Not as dodgy as ours.

Feel a bit too unfit to keep up? You sound perfect to us.

So that’s the football bit done with. However, that only covers the first third of our name.

Every time you play with us, a portion of your fees goes towards filling cupboards in your local community. Let’s say that a 5-a-side pitch costs £30 for an hour, and there’s ten of you. We’ll charge you £4. The extra quid you have given us goes into the kitty. That’s a tenner made. Half a week’s shopping for some. Job’s a good’un. At the end of the month, all that spare money gets spent on a massive food shop, which is then all given to a foodbank.

If you’ve got any questions about the match, then you should take a look at our FAQs for a more in-depth A to your Q. That’s where we’ll talk a bit more about the specifics. 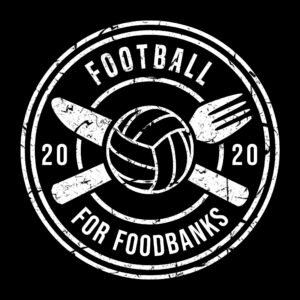